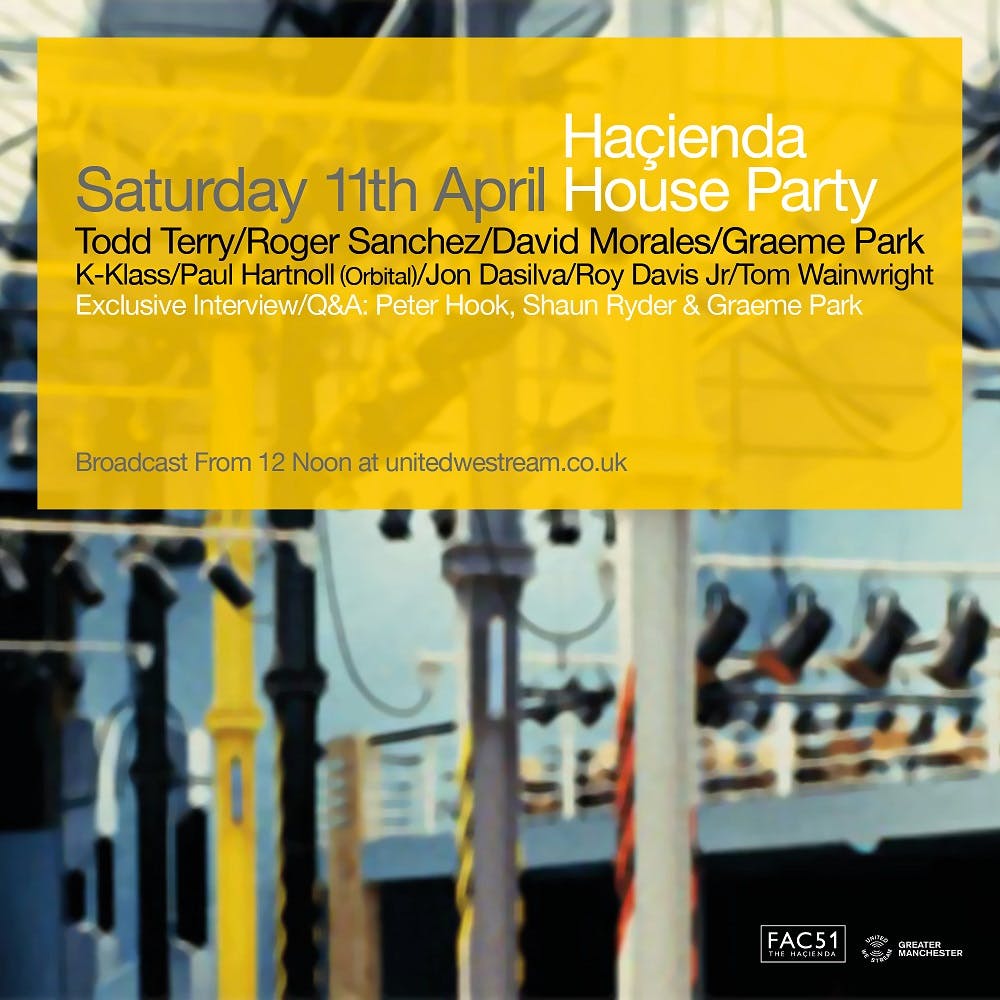 Broadcast From 12 Noon With United We Stream – unitedwestream.co.uk

This Easter Saturday The Haçienda holds “The Haçienda House Party”, an all-day online club / conversation event that brings together the finest DJ’s, residents and rock stars that have frequented FAC51 to support Manchester’s creative community and charities and channel the indomitable spirit of the club at this time of crisis.

A trio of American house legends, Todd Terry, Roger Sanchez and David Morales head the bill playing exclusively from across the Atlantic. They join The Haçienda’s own Graeme Park, Jon Dasilva, Tom Wainwright and K Klass (Live PA) who turn in their sets from our special lockdown studio somewhere in the Greater Manchester region.

Midway through the broadcast we present “An Audience With Peter Hook, Shaun Ryder & Graeme Park” as they chat about their shared histories and gigs together with John Robb and take questions from the online audience.

United We Stream is free to watch, but viewers can donate via the website, with all income of the stream going directly to a relief fund with 8% of funds raised donated to Nordoff Robbins Music Therapy Charity, 22% donated to the Mayor Of Greater Manchester’s Charity, meaning 70% of all funding generated going specifically to support the Greater Manchester’s night time economy music venues, restaurants, bars, freelancers and cultural organisations who are unable to work or operate their businesses due to the COVID-19 pandemic.

The channel is also used for positive public service announcements such as reinforcing the #StayHome message to support the NHS and emergency services, and other essential messaging regarding safety and social distancing.

Entertaining locally and globally at the same time, The Hacienda and its place in Manchester’s and music culture makes “The Haçienda House Party” another excellent reason to stay indoors this Saturday in current circumstances.

We look forward to welcoming you all Saturday with our many friends from Manchester and throughout the world.

“I can’t say I was a regular but I did go The Haçienda on a number of occasions in the late 1980s and early 1990s. In truth, I probably got turned away at the door more times than I got in but I did manage, one or twice, to get past the country’s strictest fashion police!

“I count myself so lucky to have been in and around the city at that time – it was an amazing place to be. It felt like we were the epicentre of the musical world and, for the coming generation, who had got used to growing up in a depressed and downtrodden North West, it mattered that we could go to the club that the whole world was starting to talk about.

“The Haçienda was a place where people who loved music could come together and be who they wanted to be. In these challenging times, it seems fitting that The Haçienda should once again be that beacon of unity, on our amazing new platform, United We Stream Greater Manchester, showcasing the best of our city-region to the whole world.

“Saturday’s all-day event should give people something to look forward to, and be entertained by, while they stay in their own homes protecting our NHS and saving lives. We hope to raise valuable funds to support Greater Manchester nightclubs, DJs, musicians, creatives and designers through these hard times, ensuring our international reputation, as one of the coolest creative cities in the world lasts, long after these troubling times are over.”

“It is our duty as Mancunians and Salfordians to look after as many people as possible in these dark, dark times. The original Hacienda was conceived as a home for everyone regardless of their circumstances, a place where we could all come together and enjoy ourselves in the face of adversity.

“I am very proud of the team involved in making this happen! And a pairing of Andy Burnham and Shaun Ryder is a match made in heaven…! I think they should trade jobs personally. Enjoy.”

“I’m really looking forward to DJing online with legends and friends of The Haçienda this Saturday at The Haçienda House Party with United We Stream while raising funds for charities and the local night time economy unable to work during the current coronavirus pandemic.

“We’ll be playing tunes to lift your mood while staying at home and bring everyone together online for what promises to be a massive house party. I’m also be taking part in Q&A session with Peter Hook and Shaun Ryder as well. See you all Saturday!”