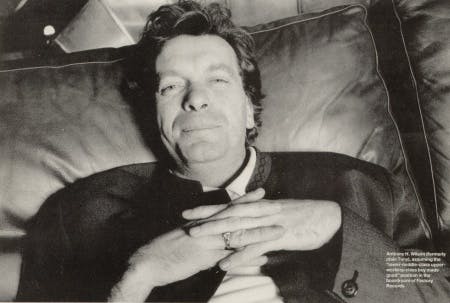 MANCHESTER’S HACIENDA nightclub has voluntarily shut down because of the threat of gang violence.

A packed press conference was held on the club’s dancefloor last week to hear Factory Records’ TONY WILSON, along with co owners NEW ORDER, read from a prepared statement.

“The Hacienda is closing its doors as of today,” said the Granada TV presenter, looking tired and haggard. “It is with the greatest reluctance that for the moment we are turning the lights out on what is, for us, a most important place.

We are forced into taking this drastic action in order to protect our employees, our members and all our clients. We are quite simply sick and tired of dealing with instances of personal violence.

“We hope we must believe we can re open the Hacienda in a better climate. But until we are able to run the club In a safe manner and in a way that the owners believe will guarantee the role of the Hacienda at the heart of the city’s youth community, it is with great sadness that we will shut our club.’

The Hacienda, opened in 1982, will be closed temporarily two to four weeks, say the club while discussions are held with the police.

“We are determined to re open,” said Paul Cons, the club’s manager. But he added that “if we cannot gain control over our own door” the club would close indefinitely, with the loss of 15 full time and 50 part time employees.

The closure follows the latest in a long series of violent incidents involving guns outside the club, which has become the focal point not just of the city’s music scene but of feuding Manchester gangs.

While few clubbers were aware of the problems door staff faced, the club has been plagued with incidents of intimidation and violence for over two years.

They came to a head late in January when a national security firm was brought in by the club to tighten security. According to Cons: “There was a serious incident on the door in which one of the door staff was threatened with a gun. In the light of this we no longer feel able to secure the safety of our club and its customers.”

The club has just fought an expensive battle to retain its licence, against a Greater Manchester Police bid to withdraw its licence because of what police called “blatant drug taking”.

lronically, in January the club was granted a six month reprieve, with police reporting “a positive change in direction” by the management. A packed ‘Thanksgiving’ night saw the British live debut of Electronic, with hordes of Manchester’s artists in the audience.

But the Hacienda had recently lacked the atmosphere and crowds that made its name worldwide as the centre of the ‘Madchester’ explosion.

One of Manchester’s most influential DJs, DAVE HASLAM, left the club in October after working nearly 500 nights there, for the nearby Boardwalk venue.

“It’s the most depressing day in Manchester club history,” he said. “But I think the Hacienda are correct in what they’ve done. I loved the Hacienda because it was a piece you could go and not feel threatened by pissheads. Ironically, violence has closed it.”

A recent Granada TV documentary claimed Manchester was the most violent city in the country. A senior detective said that the Hacienda’s action “is a reflection of the general increase in the use of firearms in Manchester.”

He confirmed that guns have been smuggled into clubs by rival gangsters competing for a bigger share of the drugs market, or simply as macho accessories.

In January, Tony Wilson said: “When we started up the club, we had no idea that these were the sort of people we would have to deal with. It’s the best club in the city that’s why they want to terrorise it.”

Manchester’s music fans and nightclubbers will now hope that the Greater Manchester Police can take measures to create a climate where the public can go for a night out without fear of being injured.

Manchester stars involved with the club have refused to comment on the Hacienda’s position, reportedly at the request of Tony Wilson. Among them HAPPY MONDAYS and NEW ORDER have both taken a “No comment” stance during the time the club is closed.