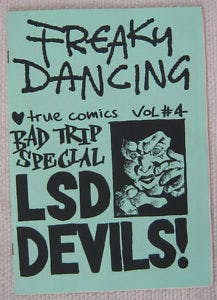 Freaky Dancing: remembering the DIY Madchester zine given out to Hacienda ravers 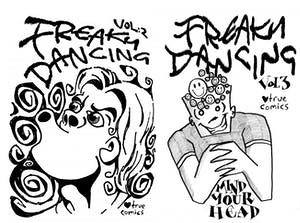 Running for 11 issues between the summers of 1989 and 1990, Freaky Dancing was the homemade document of the thriving acid house scene in Manchester, given out for free to people in the queue of The Haçienda and raved about by members of New Order, Tony Wilson and countless major DJs.

The brains behind it were Paul ‘Fish Kid’ Gill and Ste Pickford, who wrote and drew it during the week then printed it out on the photocopier at Ste’s work ready for distribution on Friday nights.

Now, 30 years later, the entire run has been compiled into a 276 page anthology, along with never-before-seen photos, flyers and comic strips, plus a foreword written by A Guy Called Gerald.

We sat down with Paul and Ste to look at why this short-lived publication has had such a lasting impact on the world of music, clubbing and DIY journalism.

What sparked the idea to create Freaky Dancing?

Paul: “Me and Ste had been producing fanzines since the mid 1980s. By 1989 we were both going to the Hacienda and acid house exploded, so it seemed like the most natural thing for us to want to capture the moment…in comic strip form. What we didn’t expect was for our mates and people from the club to join in and contribute which was fantastic. The philosophy was simple: to share this exact moment. Not for posterity – the mag was always intended to be disposable which is why it always amazes me when people tell me that they have kept them to this day.”

Paul: “It was all pretty fluid. I wrote and drew stuff, Ste wrote and drew stuff and some mates did the same. Basically anyone who had an idea would get it down on paper as quickly as possible for the next issue. People would often be finishing drawing their page minutes before we were about to print.”

Did you ever make money from it?

Paul: “We didn’t even consider it, we just wanted to share our daft comics. It was only after eight issues when the penny dropped and we realised just how much this was costing us both. The print run was rising all the time yet we still were giving it out for free – no wonder we were always skint. That’s when we decided to charge for it then sell it in shops and bars. Of course, being the brilliant businessmen we were we charged less than it cost to produce.” 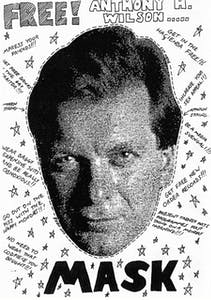 Why was the Hacienda so important to you?

Paul: “From the moment me and Ste first entered the place in 1987, a couple of years before we started Freaky Dancing, we knew this was “our place”. Unlike the other clubs we’d been going to it wasn’t full of dickheads, the venue itself was remarkable, the music was great and – very importantly – the beer was cheap.”

Steve: “People might not remember that The Hacienda was running for a good few years before the acid house explosion, and before the success and fame that its Friday nights brought. The place was already a kind of legendary Manchester institution in the mid 1980s, it was just always empty and losing money. When we started going out in Manchester in our late teens, the Hacienda was always the place we wanted to go to. It was owned by New Order!”

“For ages we could never get in. We were too young and too drunk. We’d stagger up there every Friday or Saturday after the pubs shut, 17 years old, already too drunk to stand up straight, and the bouncers would just laugh at us and say, ‘not tonight lads’, and we’d stagger off to some indie club. When they finally took pity on us one night in 1987, and waved us in, there were only about 17 people in the whole place.”

How did people respond when you started handing the fanzine out?

Paul: “We were really nervous the first couple of times we handed it out to people in the queue. Would people like it? How silly do we look? Is anyone going to be even remotely bothered? We were also genuinely scared about the Hacienda finding out about it due to it’s, uh, ‘hedonistic’ content. Would we get banned from the club? Which, at the time, would have been the worst thing ever. Fortunately the reaction from both the people in the queue and the Hacienda itself was overwhelmingly positive. Except for [Manchester rap duo] Kiss AMC, who hated it.”

Steve: “I do remember after the first couple of issues, we’d come out at the end of the night and see dozens of trodden on, ripped up, discarded copies on the floor near the entrance. Thrown away like unwanted flyers. After about the third issue though, that never happened – people got precious about saving their copies, begging for extras for their mates. I suspect less than 10 copies of the first issue survived.”

Did any of the people featured in Freaky Dancing ever take offence? Or demand to be included?

Paul: “Kiss AMC most of the time, God bless them. As for demand to be included, I remember we were given a record to review and told it would be in “our best interest” to give it a good review. The record was terrible but we gave it a thumbs up. We regretted it straight away and never did it again. And we never got the “payola” that was hinted at other than a free crap record.”

Which strip are you most proud of?

Paul: “My First Full Pint of Cider in issue number three, written by Ziggy, still makes me chuckle. That and Jesus the Original Raver from number 11, which was me and Ste paying homage to the mighty Stan Lee and Jack Kirby.”

Tell us about your most out-there experience at the Hacienda

Paul: “There were moments in the club when everyone’s drugs kicked in at pretty much the same time. It was a remarkable thing to witness.”

Steve: “The first time they played French Kiss was incredible. The whole packed dancefloor slowing down to a stop to this unbelievable sounding tune. The HOT nights on a Wednesday used to have a swimming pool in the club, and on some of the birthday nights they’d set up dodgems and fairground rides in the place.”

What are your ultimate Hacienda tracks?

Paul: “Off the top of my head I’d say ‘Acid Tracks’ by Phuture, ‘Voodoo Ray’ by A Guy Called Gerald, ‘Strings Of Life’ by Derrick May, ‘French Kiss’ by Lil’ Louis, ‘Hardcore Uproar’ by Together, ‘Energy Flash’ by Joey Beltram… I could list another 328.”

Steve: “2 Hype by Kid n Play, You Used To Hold Me by Ralph Rosario, Let Me Love You For Tonight by Kariya, Let It Roll by Doug Lazy… I could list another few hundred as well.”

What do you think of Factory boss Tony Wilson calling Freaky Dancing “The most important piece of journalism I’ve read in the last 20 years”?

Paul: “Typical Tony. Flattering, bombastic and a bit a silly. He became a supporter of the zine, getting us on telly, mentioning us in his autobiography and in the commentary on the 24 Hour Party People film. I once saw him dishing out copies in [downstairs cocktail bar] the Gay Traitor. We affectionately took the piss out of him all the time in the mag but we actually really loved him.” 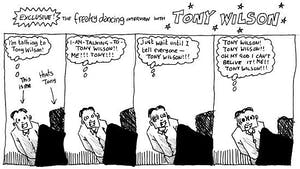 Did Steve’s boss ever find out he was using company property to produce the fanzine?

Paul: “Ste was one of four directors at the company. One of the directors didn’t find out until after the event but at the time he’d lie awake at night worrying about the photocopier and why it was costing him so much to maintain.”

What’s the story behind it being released?

Paul: “I’ve been asked many times over the years why there isn’t a compilation. I’d always fancied putting one together, whilst Ste had always been quite resistant wanting to leave it as a fond memory. I eventually persuaded him but the project drifted for a while as inevitable life and work commitments got in the way. It’s taken a great deal longer than we anticipated to put it together as Ste had to clean up all the decades old fanzine pages, plus we wrote and drew a bunch of new stuff, but it’s been worth it.”

What do you think of Manchester’s club scene these days compared to back then?

Paul: “I don’t think I’ve actually been to a club for years but I do drink in the Northern Quarter often, which is always alive. Bear in mind back in 1989 Manchester was a pretty bleak place to go clubbing. With no Northern Quarter, no modern day Canal Street, no bars open after 11pm, you were pretty much restricted to a handful of clubs where you could hopefully make it through the night without getting punched.”

Steve: “Like Paul, it’s incredibly rare that I ever go to a nightclub these days, so I’ve no opinion or insight into the club scene today, although my eldest daughter has started going out in Manchester a lot, and seems to be having a great time going to drum & bass all nighters and stuff like that, so it’s probably better now than it ever was for us. One thing the Hacienda benefited from was the strict licensing hours we had back then, when clubs opened at 9pm and shut at 2pm, with no other opening hours available. It meant that everyone had to do their partying together in a strict five hour window, and everyone pretty much peaked at the same time, which was part of what made The Hacienda so special. It was never quite the same at all-nighters, with people arriving and leaving at different times, coming up at different times – you don’t have that focus and intensity of everyone on exactly the same vibe.”

Freaky Dancing: The Complete Collection is out now, available at Amazon and all good book stores.