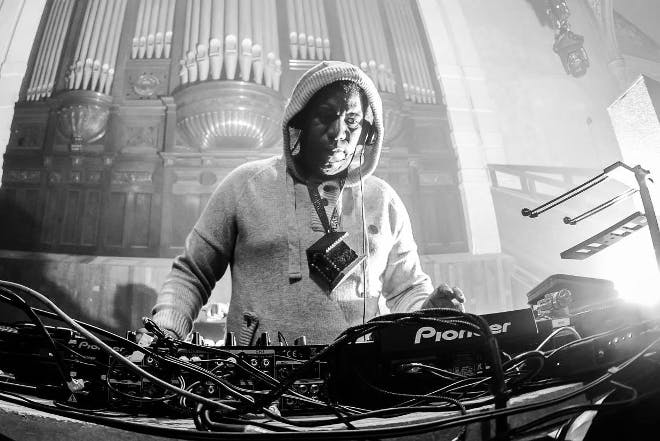 With the scene and stage having been set by Herbie Saccani at Hacienda NYE at The Albert Hall, the one true innovator Marshall Jefferson took to the stage in the run up to midnight at the event, the first up of trio of US DJ legends performing that evening.

Given an hour to play the best of MJ’s modern and classic working it house music, his stylings include syncopated vocals and such tricks as he begins with some deep downbeat dirty grooves, punctuated by strong female vocalsm following an anthemic New York party style for the night with tight us club material.

Moving towards electric dubs and oldschool samples with the bumping groove of Mark Knights and Martin Ten Velden Remix of the space aged “In The Beginning”, a change of pace comes with what many people have said was their highlight of the night Joes Smooth’s “Promised Land” with a long mix out into the charging piano dub of Marshall’s own classic “Move Your Body”, weaved in and out by the very hands that produced it.

Continuing along with the theme with a couple of classics, the extended vocal intro of C And C Music Factory’s anthem “Pride (A Deeper Love)”, Strictly Rhythm’s “Deep Inside” by Harddrive, Marshall then takes things more Balearic with Junior Jack’s re-working of Dajae’s “Everyday My Life” before taking things deep and disco to the end of his set with Adeva Vs Nathan Rivers “In And Out (Of My Life).

With MJ handing over to Frankie Knuckles at midnight, The Jackson Sisters “I Believe In Miracles” gets a room shaking run out before Marshall takes things to the bridge with a Basement Jaxx cut, “Samba Magic” from the Summer Daze EP.