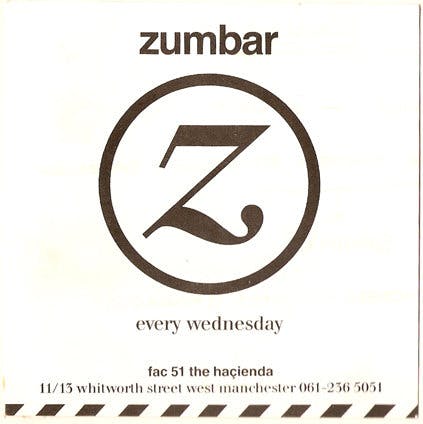 Wednesday Night @ The Hacienda during the late ’80s

Zumbar filled the Wednesday night void which appeared when Hewan Clarke stopped doing Black Rhythms at the Poly Union in summer 1987. The boHulmians switched the cheap mid-week night out to the Hacienda instead.

Most students still didn’t go to the Hacienda because they thought it was ‘too cool’; they preferred places like The Bier Kellar where they could get in free, get pissed and cop off without being scrutinized by the fashion police. The Hacienda’s austere interior and Factory’s striking graphics actually repelled hundreds of the club’s potential customers. 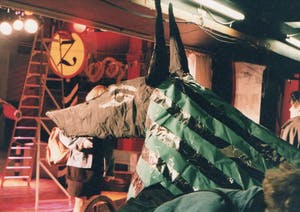 I assume that Zumbar was an attempt to broaden the appeal of the club. The publicity didn’t convey this very successfully, but the club’s new policy of hiring variety performers and inviting businesses to stage catwalk shows did pull new people in.

These pictures record rehearsals for a show by Team For Hair around Easter 1988. Me and my friends made the set and some of the costumes and another friend, Trafford, did the choreography – everything was done for free or on a shoestring. On the night, Paul Cons (one of the Hacienda management) said our set was ‘low tech and tacky’ and I was so gutted that I fled downstairs to the Gay Traitor bar and missed the show.

In many ways Zumbar was a gay disco in all but name, because the music policy and the cabaret ideas were lifted directly from the gay clubs. I imagine this was down to Paul Cons’ influence. He went on to run the monthly Flesh gay nights in the 1990s. 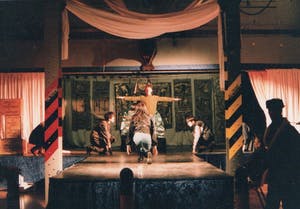 Me and my friend Geraldine were regulars on Wednesday nights when suddenly Zumbar changed to Hot, without warning, some time in July 1988. I didn’t care about the variety acts disappearing but I was disappointed that the music variety was stamped out. The Zumbar DJs played all sorts: ‘Get Into The Groove’ by Madonna, ‘Twilight’ by Maze, ‘Boops’ by Sly & Robbie and ‘All in All’ by Joyce Simms, along with various house tracks.

But Hot was JUST house, all night.

I bumped into Geraldine on the dancefloor on the very first Hot night and I complained that I didn’t know how to dance to a particularly bleepy track. She said, ‘I think you’re supposed to do this’ and showed me the arm flapping acid house dance. I copied her but I thought, ‘God, I hope the music changes soon…’ This sadly turned out to be a vain hope.

There were some great acid house tracks; the problem was the new rule that acid house had to be played constantly all night.

Most of the Acid House we heard sounded more like ‘Acid Trax’ by Phuture – very repetitive, minimalistic and devoid of vocals; the effect was trance-like, even without drugs, but it did become very boring after an hour or so. I used to think of it as an aerobic work-out. 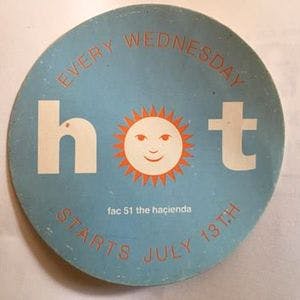 There were stickers for Hot instead of flyers… they were sky blue and white with an orange sun logo. I had one stuck on my radio for years but it faded and eventually got thrown out with the radio when it broke. I can’t find any images of this sticker on the internet… maybe everybody elses faded too.

I persevered with the Hot nights because they were cheap and my friends were going, but I just bought lager from the Can Bar; I didn’t take E, and this was true of lots of people at first. A summer holiday themed night was a really funny idea, and we all got into the spirit of it, especially those of us who didn’t have a proper summer holiday to look forward to! Manchester can be a grim place to be stuck all summer!