Celebrating the 40th anniversary year and with some of the most iconic dance music pioneers across the line up, the full line up has now been announced for FAC51 The Haçienda’s debut at London’s historic Tobacco Dock for a unique event.

Bringing together four of its most legendary nights, Nude, Hot, Flesh and The 5th Man, the all-day show will be the largest event the legendary nightclub has held in the capital and delivers one of the strongest line ups The Hacienda or the capital has evet seen 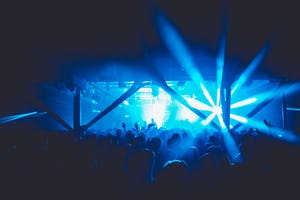 Bringing together the key nights that formed the club’s very distinctive identity at Tobacco Dock’s Grade 1 listed warehouse space in London’s East End, the cavernous main rooms at the venue host wall to wall DJ legends placed across the event.

With Nude in The Great Gallery, Masters At Work play their first UK club show in seven years with Masters At Work ‘Little’ Louie Vega and Kenny ‘Dope’ Gonzalez coming to these shores. The duo’s output has shaped house music as we know with a wealth of classic tracks, originals and edits including “To Be In Love”, “I Am The Black Gold Of The Sun” and “Work” as their momentous catalogue draws influences from disco, soul, and funk and the very essence of house.

Their first club appearance in the UK outside festivals since 2015, MAW are joined by an exclusive live performance from Inner City Kevin  Sanderson’s outfit responsible for giving the world ‘Big Fun’ and ‘Good Life’.

With the band now featuring its founder, his son, Dantiez, and gospel vocalist Steffanie Christi’an and while performing new tracks,  it’s the classic old school hits that get the best reactions from live crowds

Meanwhile the original DJ’s who defined Nude, first Mike Pickering, then Graeme Park are reunited along with Haçienda resident Tom Wainwright with

PA’s from Alison Limerick (“Where Love Lives”) and Robert Owens (“I’ll Be Your Friend”).

Over at the Haçienda’s 1988, seminal, scene setting Hot Night a trio of Detroit Techno legends, Carl Craig, Kevin Saunderson and Juan Atkins who all laid the foundations for the develop of electronica, all three have come to change the world with their many signature tracks and remixes.

Meanwhile Todd Terry and Derrick Carter come to celebrate Flesh’s 30th anniversary as the trailblazing LGBTIQ+ party takes over the skylit Terrace in its own unique and inimitable style with its chorus of original DJ’s from the night, DJ Paulette, Kath McDermott, Guy Williams and Dave Kendrick.

A new room at the venue’s “The Loft” has also been added as The 5th Man, The Haçienda’s downstairs club room in the mid 90’s which will see Colleen “Cosmo” Murphy, Peter Hook, Robert Owens DJ, Hewan Clarke and Jesse James

With the incredibly strong line up honouring both the legacy of The Haçienda as well as the artists involved, looks to be one of the very best events of the 2022 as The Hacienda begins its fortieth anniversary year. 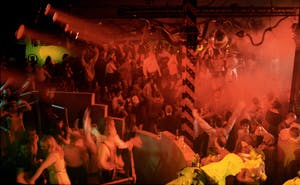 The Great Gallery: Hosted By Nude

The Car Park; Hosted By Hot

The Loft : Hosted The 5th Man