OVER 4 MILLION VIEWERS OVER £115K RAISED 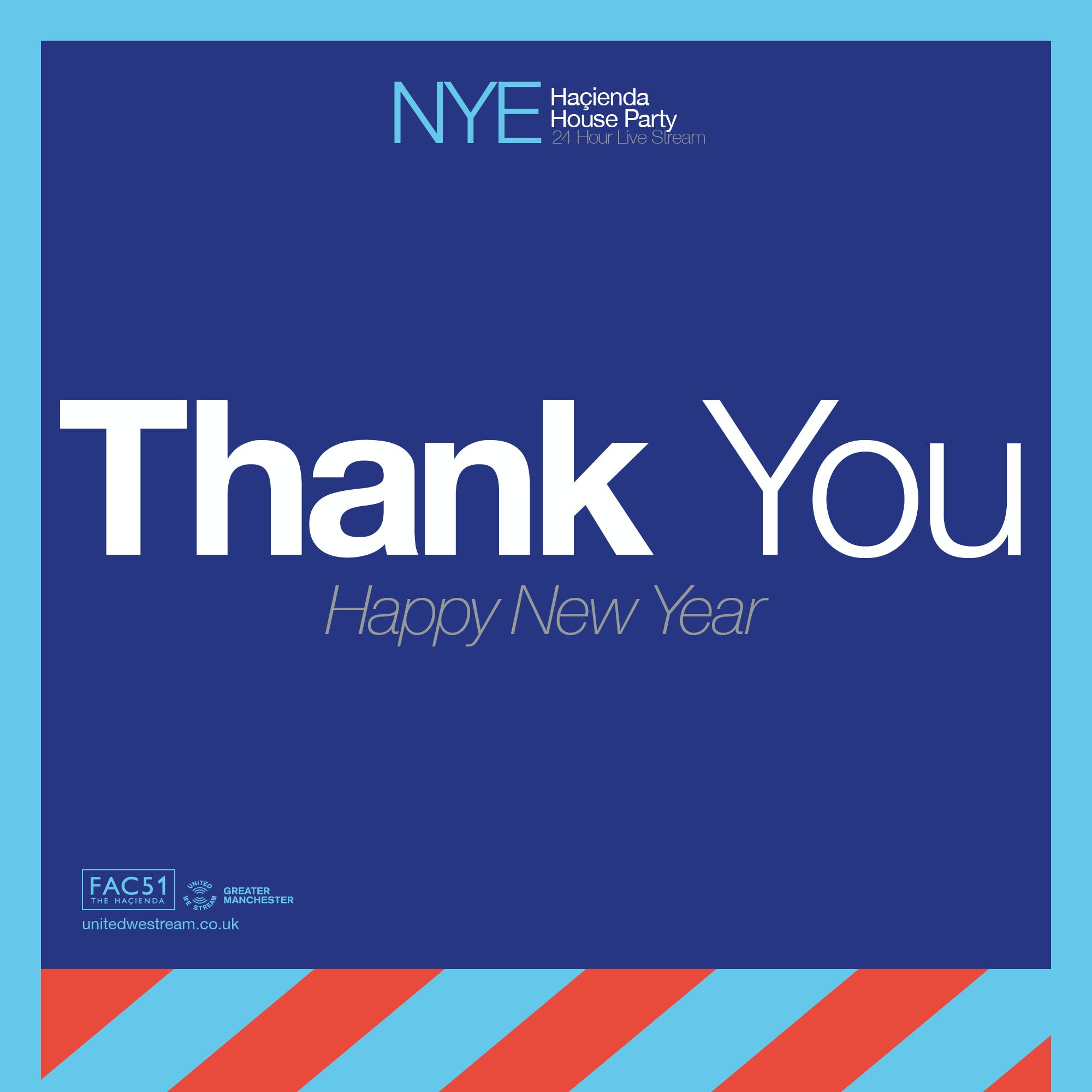 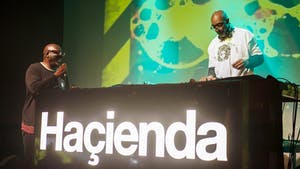 FAC51 The Hacienda and United We Stream GM ROCKED THE GLOBE – with the biggest ever New Year’s Eve house party in the world.

The incredible twenty-four hour live streamed event saw millions tuning in from all corners of the planet, to celebrate, and bring to an end to what has been an incredibly challenging year.

Haçienda Twenty-Four Hour House Party NYE amassed a global audience of over four million people, who enjoyed The Haçienda’s stunning line up of DJ’s, performers and even a full orchestra with the globally renowned, Hacienda Classical.

The show was totally free to watch, but donations welcome, and raised an impressive £115,000 for specially chosen good causes. The marathon show is a fitting finale for multi-award winning United We Stream GM, as the Manchester based cultural broadcasting project has now finished.

Donations can still be made using this link: http://bit.ly/HaciendaNYEDONATE

Naturally, the lion’s share of the audience hailed from The Hacienda and United We Stream GM’s home city: Greater Manchester. 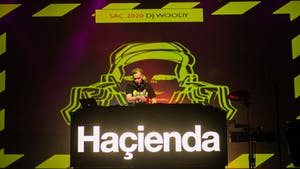 The show trended no.2 in the UK on social media platform Twitter for hours leading up to midnight, with hundreds of thousands of excited people posting pictures and videos of their household celebrations, and countless comments filled with gratitude and nostalgia as they partied their way into 2021.

The Haçienda 24 Hour House Party NYE and previous Haçienda streams were all curated and co-produced by Haçienda manager, Paul Fletcher and produced live from the Met Theatre in Bury, Greater Manchester.

The three Haçienda events showcased some of the world’s finest international DJ’s, a gallery of The Haçienda regulars and some very special one-off live performances, all broadcast exclusively via United We Stream GM and their social media platforms.

United We Stream GM was created in response to the first UK shutdown and began broadcasting diverse Manchester music and culture on April 3rd.

After producing 37 live streamed events and the project ending in the summer, The Mayor of Greater Manchester Andy Burnham, requested the team produce special festive shows during the Christmas holidays, to reinforce the ‘Stay Home’ message, help raise funds to tackle rough sleeping in the city, and boost morale for mancunians due to growing concern about a decline in mental wellbeing.

In total United We Stream GM has raised an incredible £583,000 in nine months for 30 good causes, and has given ‘United We Stream’ solidarity grants to 130 night time economy and hospitality freelancers and businesses, who were struggling to support themselves during the first lockdown.

The programming was rich in diversity and genres, curating events with unsigned artists alongside global headline acts. A variety of under-represented voices and cultural groups were also showcased, including a ‘Summer Prom’ to raise awareness and understanding of mental health issues in young people, ‘Breathe’, a stream curated by and exclusively featuring BAME talent and Manchester Pride, a three-day virtual festival broadcast for the LGBTQI community.

Production and fundraising have now ceased; however research is already underway to convert the platform into a sustainable model to support the regions vast cultural sector, showcasing breakthrough talent across the world.

The experience and relationships formed during United We Stream’s audacious nine-month run will support the delivery of the Greater Manchester Cultural and Night Time Recovery plan.

The £115,000 raised will be split between The Mayor of Greater Manchester’s new campaign, oneGM, Save The Children UK, Peace Meal and The Frankie Knuckles Foundation.

All DJ’s and performers involved generously gave their time and talents gratis to the event, to help raise as much money as possible for these good causes.

Andy Burnham, who posted numerous tweets on his personal Twitter account throughout the live event enthused: “Other cities spend £££ trying to outdo each other with firework displays on New Year’s Eve.

“Greater Manchester raises £££ for people who are homeless by entertaining the world to a 24-hour party from FAC51 The Hacienda. I love this place. Still doing things differently. #ProudMayor.” 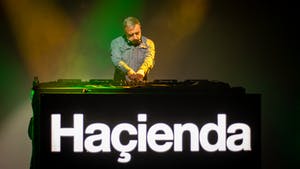 Peter Hook said: “It was wonderful that the event on New Year’s Eve was so successful and I am glad that we are starting the New Year on such a positive note. Let’s hope this year goes from strength to strength and the next time we meet will be in person.”

“I’d like to thank everybody who watched and donated. Happy New Year.”

The Haçienda resident DJ Graeme Park played house anthem classic ‘Better Days’ Big Ben chimed at midnight, said: “I’m extremely proud to have been part of a project that was watched by millions and raised so much money for people affected by this horrible pandemic.

“It was an absolute joy to be able to perform another exclusive Hacienda Classical set and a privilege to see in 2021 whilst DJing at the coveted midnight slot. It’s been an honour to be a part of the amazing work that FAC51 The Hacienda and United We Stream GM has carried out throughout 2020 which has quite rightly received incredible feedback.”

FAC51 The Haçienda manager Paul Fletcher said: “The idea of these special event streams was to not only raise much needed funds for some good causes but to also to raise people’s spirits during these very testing times.

“To go for 24 hours was certainly a challenge especially with the Haçienda Classical show and the Frankie Knuckles Virtual Haçienda, but as always we wanted to do things differently.”

“I’d like to take this opportunity to thank all the DJ’s, acts, the team at United We Stream GM and everyone behind-the-scenes who came together to make this such a great success.

“A tremendous amount of work and effort goes into these events and everybody involved deserves great credit! I just hope we can do it all for real soon!” 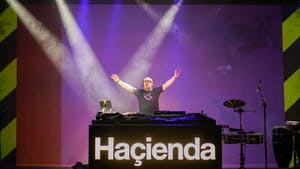 DJ Paulette concluded: “What an honour, a thrill and an absolute joy to be a part of the FAC51 The Haçienda show. I’ve never played to so many people in an empty room and it is crazy thinking about how many lives, homes, eyes, ears and hearts my messages of love, positivity, support, recognition and music have touched – including mine.

“So much work went into this production before anyone played a record, so big ups to everyone on the team behind the scenes and in front of the camera for creating such a beautiful 24-hours viewing.

“Happy New Year to all – to better and brighter days ahead!” 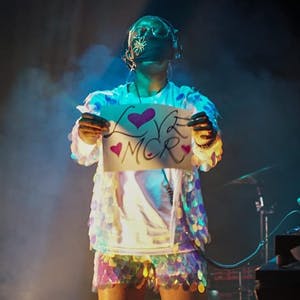 DJ Paulette, Peter and Graeme were joined by an array of highly respected and talented DJs for the marathon show.

From the New York scene, Danny Tenaglia, David Morales, Todd Terry and Tony Humphries. From Detroit, techno legend Carl Craig DJ-ed in a black fur coat and ski goggles, and live from the sunshine of Los Angeles, globally renowned DJ and producer Moby, all playing one off, exclusive sets for The Haçienda.

There was also a special tribute to legendary DJ Frankie Knuckles: one of his last sets before he sadly died in 2014 was reproduced through virtual reality – and brought back to life in the virtual Haçienda.

Developed carefully over the past five years, the Virtual Haçienda project has been a labour of love, with original architect Ben Kelly, creative directors Brendan Mannion and Justin Metz and Peter Hook who collaborated to produce an authentic facsimile of the original club on Whitworth St West in the city centre.

Frederick Dunson of The Frankie Knuckles Foundation said: “What an awesome way to end the unprecedented year we have all experienced!

“We’d like to offer our heartfelt thanks and gratitude to FAC51 The Haçienda and all of the stellar roster of DJ’s and talent that participated.  The virtual tribute to Frankie was incredible. Seeing him again was heartfelt by his legion of fans on this side of the pond and abroad.  And lastly thanks to all of you who gave a donation. Your support is greatly appreciated!”

“Wishing you a happy new year full of endless possibilities, health and prosperity.”