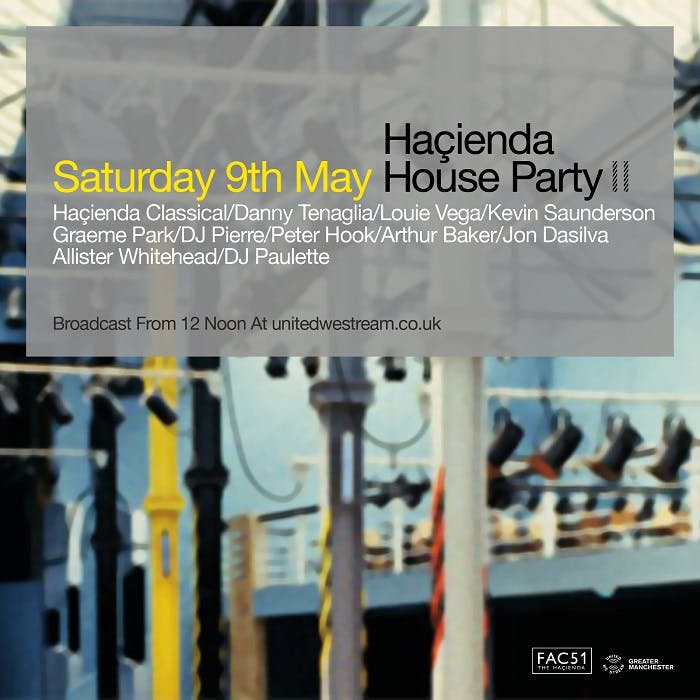 A One Off, Virtual “Haçienda Classical With Manchester Camerata” Performed From Lockdown With Some Very Special Guests

Given the worldwide success and widespread acclaim for our debut Haçienda House Party on Easter Saturday, we just had to do it all over again. Not least for the 1.6 million viewers who tuned in first time around…

So next Saturday 9th May sees The Haçienda throw open its distinctively numbered doors for “The Haçienda House Part II” with United We Stream Greater Manchester (GMCA’s fundraising streaming platform) for another epic twelve hour session as some of the greatest US DJ legends supply exclusive sets whist many of The Haçienda’s finest play out from our secret lockdown studio straight out of the Greater Manchester region.

Meanwhile Haçienda Classical with Manchester Camerata is putting together a very special one off virtual live show for the evening. DJ Graeme Park and musical director Tim Crooks bring together the Camerata players, additional musicians, our vocalists including Yvonne Shelton, Melanie Williams, Rae Hall and some very special surprise guests, all arranged and performed under current social distancing restrictions.

The DJ line up again amasses some of finest American originators and producers from their respective scenes, New York’s seminal talents of Danny Tenaglia, Louie Vega and a man who needs no introduction to Factory Records and The Hacienda, Arthur Baker. Along with Detroit’s and Inner City’s Kevin Saunderson and then DJ Pierre’s Wild Pytch skills from Chicago, they form our roster of five international friends for this twelve hour stretch.

From The Haçienda and beyond, Graeme Park and Jon Dasilva return to the establishment, and are joined for the day by fellow residents Allister Whitehead, Peter Hook and DJ Paulette.

Haçienda Classical has seen FAC51 team up with its hometown orchestra Manchester Camerata since its debut in 2016 and highlights include some nine sold out concerts at Castlefield Bowl and The Royal Albert Hall with headline appearances at Kendall Calling, Isle Of Wight Festival (twice) and opening Glastonbury Festival on its Pyramid Stage.

Manchester Camerata is “Britain’s most adventurous orchestra”, according to The Times, and whilst working as one of the very best of the UK’s performing orchestras, their long-standing work in the community with schools, care homes  and people living with dementia shows their great compassion for and commitment to the Greater Manchester region.

United We Stream is free to watch, but viewers can donate via the website, with all income of the stream going directly to a relief fund with 8% of funds raised donated to Nordoff Robbins Music Therapy Charity, 22% donated to the Mayor Of Greater Manchester’s Charity, meaning 70% of all funding generated going specifically to support the Greater Manchester’s night time economy music venues, restaurants, bars, freelancers and cultural organisations who are unable to work or operate their businesses due to the COVID-19 pandemic.

The channel is also used for positive public service announcements such as reinforcing the #StayHome message to support the NHS and emergency services, and other essential messaging regarding safety and social distancing.

Marking our second only ever “Stay-At-Home-Rave”, “The Haçienda House Party – Part II” brings the spirit and style characterised by the club during its history to households throughout the world next Saturday. Make sure not to miss out.

Peter Hook said: “Here we are again, hopefully, taking everyone’s mind off to a better place just for the day. Remembering the great things about life, love, happiness and of course, The Hacienda. Stay safe, stay home. Love Hooky 20”

Graeme Park said: “After the huge success of our last Haçienda House Party I can’t wait to take to the decks again for Part II which promises another huge day of quality tunes from another massive line-up. Look out for some surprises too as I plan to dig deep into my archives and drop some tunes you may not have heard for a while….”

Arthur Baker said: “It’ll be great to have the opportunity to play a set for my friends and family in Manchester, my spiritual U.K. home. With the amazing Haçienda Mayfield Depot gig last year I was actually very anxious about coming back again and rocking out with my old friend Hooky and the crew. This will be the next best thing to actually bring there, sharing the digital club waves with my boys Louie, Kenny, Danny, Pierre, Graeme, my girl Paulette and all the rest of the crew. Looking forward to playing some classics and some of my rocking new tunes. Take care and be safe!”

Paul Fletcher, FAC 51 The Haçienda Manager said; ““When we did our first Haçienda House Party Easter Saturday, we had absolutely no idea how it would go. Even with an audience of over 1.5 million tuning in, it felt weirdly intimate and there was so much love throughout the day, reaching out from the music, that we just had to do it again. Huge thanks and respect to all the DJs Performers, crew and of course James for making all this happen. A lot goes into these shows. Don’t forget to donate and stay safe.”