For its annual Christmas event, FAC 51 The Hacienda brings together a team of eight of the club’s original residents at Sankeys on Saturday 27th December for a special event which celebrates the DJ’s who created FAC 51’s distinctive sound during the original clubs fifteen year run.

This set of residents were responsible for the musical direction of The Hacienda, playing week in, week out at the club, breaking the records that went on to influence dance music worldwide. These DJ’s remain masters of their craft and return to the club with them not only having shaped the music policy but with the club having shaped many of their careers. 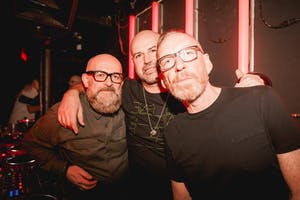 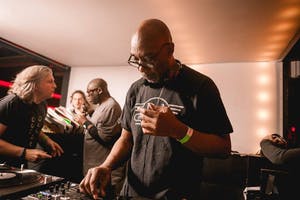 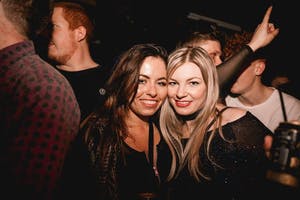 For the full gallery from the event please check here.

Quotes From The Residents

Mike Pickering, who has found world-wide success with M People and as a record exec with Deconstruction and now Columbia Records, was the club’s original booking manager, hired prior to the club’s opening in May 1982 by his old friend and fellow City supporter Rob Gretton. Remaining at the club for a full decade, Mike worked across both the indie and the acid house eras of the club, remembering that, “it was wonderful prior to acid house. People didn’t come in there for a while but we still had an amazing time. Like 150 people, like it was very secret society. it was great. The Nude night, my Friday night started about 85 / 86 and was packed, even from the off.”

Graeme Park had  amassed a reputation for championing the development of house music at Nottingham’s The Bomb and first DJ’d at The Hac as well as playing live with Groove at February 1988’s “Northern House Revue”. When Mike took his first ever holiday in June of that year, Graeme was called in to deputise. “The whole night was amazing, within 20 minutes the whole place was packed which was a weird one as well. And then for three weeks I had an absolute ball, I didn’t want it to end. And then I got a call from Mike after I’d headed back to Nottingham the following week asking “Did I want to come and do it with him every week?” and I was like “Absolutely, yes!”.

Parky was to remain at FAC 51 for an unbroken eight year stint, first sharing the decks with Mike at Nude, then taking over the Saturday night from when the club split the Park / Pickering partnership across Fridays and Saturday in May 1991.

As well as Mike and Graeme, the Christmas party will throw back to the opening days of the club as “The Big H,  Hewan Clarke the first ever resident DJ comes to play a special set of early Eighties cuts reflecting the eclectic sounds that characterised the club early doors. Mixing his staple soul and jazz funk cuts with commercial early Eighties pop, Hewan was a veteran DJ in town by the time The Hacienda opened, having cut his teeth at clubs like The Nile, The Reno, Fevers and Berlin.

Meeting A Certain Ratio in a club and then Tony Wilson, Tony claimed Hewan was his second favourite DJ in the world, second only to New Yorks Frankie Crocker and made him The Hacienda’s debut resident which meant an almost week long residency.  “I was doing practically every night. Tony Wilson was very ahead of his time, saying that black music was going to be the next commercial dance music. I never thought like that in those days, I just got on with playing the music.”

Joining Hewan representing The Hacienda’s early years is   the legend that is Greg Wilson, resident during 1983 also brings his sublime selection of remixes and edits to the event. Although only resident for a four months before he left to manage Hac break dancing crew ,  Greg was to return to the decks in the early Noughties becoming much in demand and greatly acclaimed in the process.

Greg remembers The Hacienda thus ; ” The Haçienda was never a club in the conventional sense, somewhere underpinned by sound business logic – that was both its strength and its weakness. It was all about crazy dreamers, people like Tony Wilson, Rob Gretton and Mike Pickering, who kept believing, initially very much against the odds, that it would all somehow come together, which it eventually did in such a seismic way. I’m just happy to have played my bit part, helping sow the seeds that would lead to the venues phenomenal rise later in the decade.“|

Despite his American sounding name, Chad Jackson hails from the North West and also with Greg Wilson pioneered the art of mixing in the early Eighties, playing at clubs like Legends and Wigan Pier before being asked to take control of The Hacienda’s new Saturday night, “Big Noise” in 1985. Later responsible for the number one hit, “Hear The Drummer Get Wicked”, Chad was also crowned Technics/DMC World DJ Mixing Champion in 1987 and also may have been the first to play house music at the club.

“I went record shopping at Spin Inn to get the freshest vinyl releases of that week and one week picked up JM Silk – ‘Music Is The Key’. I went crazy for the sound and started hammering it at the club, specifically the dub mix. Many cite Jessie Saunders ’On And On’ as the first house record and but as I remember it, ‘Music Is The Key’ was the first record I heard that had the full electronic, percussive, jacking sound that we now term as House Music. So I may have been one of the first people to play House Music at The Hacienda.”

As the club entered the Acid House era, the mercurial Jon Dasilva, whose talents have seen him dubbed “the Eric Cantona of house music” was recruited to spin the emerging sounds of the underground at seminal nights including Hot, Wide, Void and Shiva. Admitting that “the Hacienda years were my formative DJ years, a period that forged my style and reputation”, Jon’s innovative style and use of soundtracks, as well as mixing in key came to inspire many DJ’s including a young Sasha who has consistently namechecked Jon as one of his key early influences.

About the early scene Jon commented that “initially, the scene was very small. You were only talking about a few hundred people really in what is a very big city but those few hundred people it changed their lives. It wasn’t just Manchester as well. The Wednesday night, the Hot night was a national event almost. You had Slam down there from Glasgow,  James Baillie who did Venus, Daddy G from Massive Attack. There were loads of future promoters as well, James Barton for example that were influenced by the Hacienda, The Hacienda really was Manchester’s acid house culture at the time.”

As the club re-opened in may 1991, Tom Wainwright became a resident to support Graeme Park on the club'[s new Saturday night. Considered more upmarket to its Friday night counterpart Shine which has replaced Nude,  the Saturday didnt officially have a name, instead being represented by a squiggle design.  Playing the cream of US house and garage, Tom would warm up for Graeme playing deep house and dubs and went on to remain on Saturday duty for five years up until 1996.

“Playing at the club was huge for me.  I started going in 1987, and I used to go three or four times a week.  By the time I got to DJ there I’d spent several years on the dancefloor and had a pretty good idea about what made the club tick.  I was lucky enough to play at a lot of great clubs around the world, but for me nowhere really came close to playing at The Hacienda ”

And finally, over at Friday nights “Shine”, Allister Whitehead became a resident at the club in 1992. A long standing supporter of FAC 51, he echoes Tom’s sentiments in remembering how lucky he was to play the Hacienda – ” Not many DJ’s got the chance to play the Hacienda, it was like being asked to play for England“.  Originally covering for Mike when he was on tour and recording with M People, Allister remembers some very specials Fridays, including playing alongside Todd Terry and Kevin Saunderson, as wells as the infamous foam parties.

“To play the Hacienda at full pelt was a rare thing for a DJ apart from Graeme and Mike. The memories I will l keep with me forever. I thank you Mike Pickering, Graeme Park, Peter Hook, Ang Mathews and everyone at the club.”