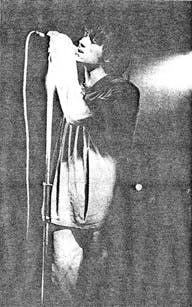 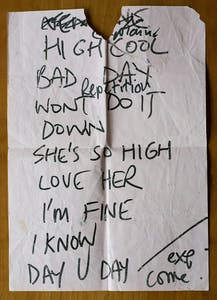 HARDLY any big trousers in the area tonight; the crowd is mostly old-style indie as opposed to indie-dance. Quite surprising, that. It feels of muted too. But the night is young and the hippo looks happy, and that’s always a good omen.

Sinister Groove aren’t too sure though. They’ve got the music, but they seem unable to pop it out into three dimensions. So it stays flat; good, but flat. Which is a shame, cos it’s fast and funky with treble-high drums, snare and cymbal to the fore, and a low-riding bass. Guitar is blurry Sixties swirls, then it’s short, punchy mod riffs, then it’s slow and hazy blues vapour. During the last two numbers, though, something happens. The music snaps open and we’re off and rising on wiggy guitar and a power-grooving beat. The power of hippo.

Space, colour, sound, cool. This is Blur – they look good and sound large – Damon Singer jumps and thrashes round the stage as the raucous, vibrant energy boosts out. He looks like a cool Peter Tork. Guitar powers up into a grainy-overdrive blast then expands to fill the place with sound colour. The whole machine banks and dives into a tonal, guitar-bleeped haze with voice drawling and drums dragging.

Basslines whack hard and Damon bobs around like a puppet on sagging strings, then he stops and walks round scratching his head and looking at the floor instead. Why is this cool? Because it is. Wicked vocal harmonies and massive, circular riffs surround you with buzzing patterns and “She’s So High” is stoned erotic. “I Know” is pure Sixties vibe, and it’s mad; synth tones pipe out wide, a beat comes in and guitar races round twirling curves. The chorus is bliss. The final song rises on a wall of treble-humming feedback before a slithering cymbal beat skids through and all hell breaks loose. The crowd go potty.

The encore is introduced as an old Beatles tune, but it really doesn’t matter now because I’m as happy as a hippo. And rising.