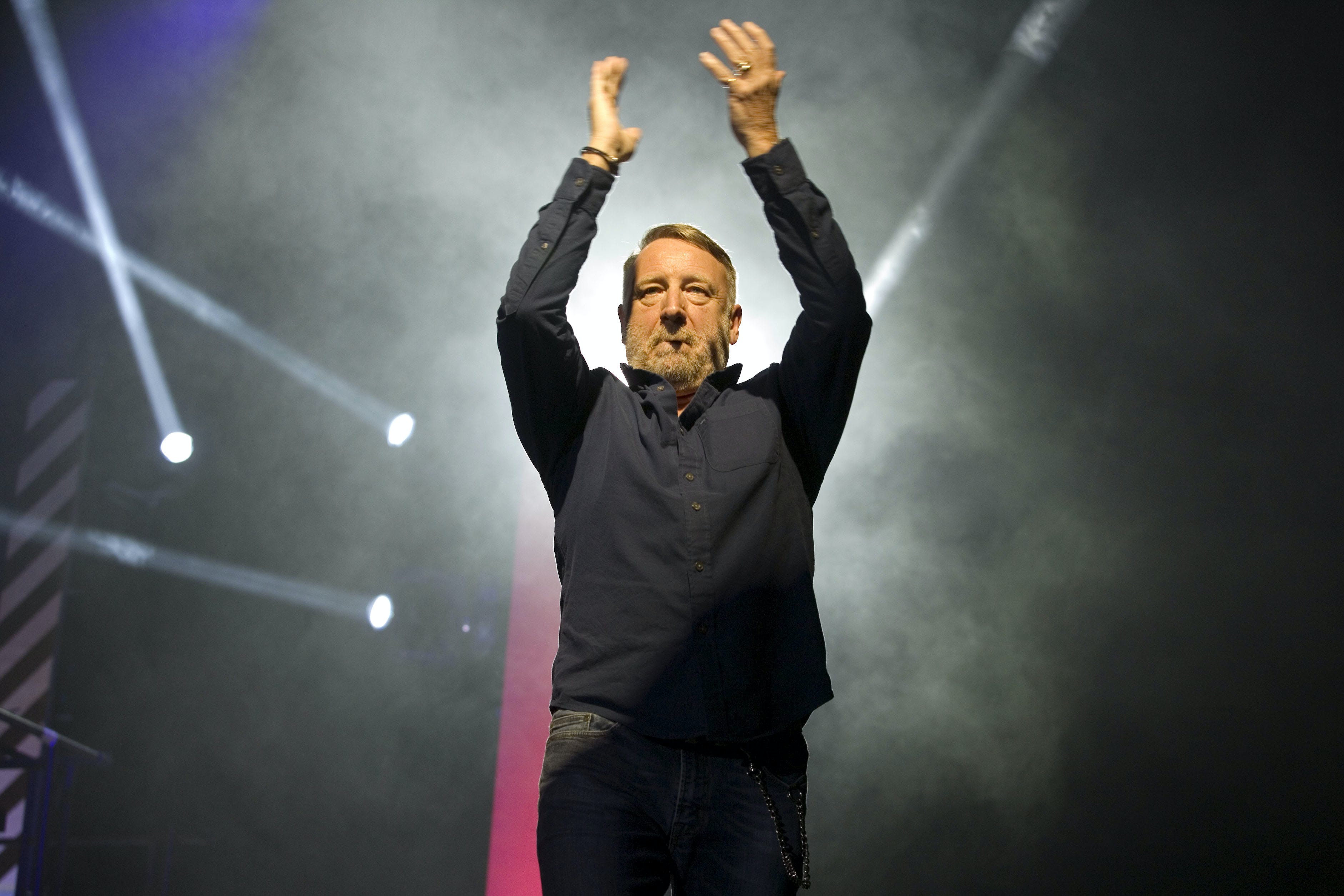 Having travelled the world multiple times over performing hits True Faith and Blue Monday with New Order or Joy Division’s Love Will Tear Us Apart, there is ‘something special’ about sharing the music in these parts.

And he’s counting down the days until next month, when he and his band arrive in Blackpool for the highly anticipated return of Haçienda Classical – the acclaimed clubbing series with DJ Graeme Park.

The 65-year-old said: “As a youngster coming from Salford, the big deal in my life was mainly getting to Blackpool.

“The thrill of getting to Blackpool has never really waned and it was quite odd – as Joy Division we never made it to Blackpool but as New Order we did.

“We played our second gig at a disco called Scamps (the gig was in September 1980) I remember it up on the front near the Butlins and even now at the ripe old age of 65 it is just such a thrill – a wonderful treat, a big part of your life.

“So to come back with the Haçienda Classical is absolutely wonderful and I have the same thrill now.” 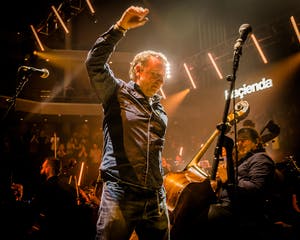 Almost two years since the last UK concert, the Haçienda Classical, which has performed to audiences of more than half a million in its six years, opened their tour last week and will play their second gig as part of the new Sound Of The Ground Festival at Blackpool Cricket Club on Sunday, August 29.

The two-night event, which opens on the Saturday with a Last Night of the Proms production with Collabro and the Royal Philharmonic Orchestra, is a different setting to the clubs Hook and the band played during New Order’s disco nights in the noughties.

He adds: “Those were great occasions 2008/9 I think in the superclub (The Syndicate).

“We’ve done Rebellion Festival a few times – it’s great for the town, great for the people so I’m holding up very high hopes for this.”

But the Fylde coast not only holds fond memories for its performances but the trips the dad-of-three made in his late teens for some mad nights out. He affectionately labels these his ‘normal years’ before picking up a bass at 21.

He says: “We always used to go to Blackpool – we used to go to Tiffany’s and then not be able to drive home, sleep there until the morning.

“And this would you believe is where I saw my first UFO.

“Me and my mates had come down on our scooters in 1973 and gone out, we’d been to the club in the Tower Ballroom and we were sleeping on our scooters – how tough were we?

“Even in the summer Blackpool was freezing at night. One morning parked in some labour club in front of the bowling green and it was beautiful clear blue sky.

“I was looking up and saw something, it was something like the Apollo moon landings, bright electric lights, octagon shape, it was a woah moment.

“I woke my mate up and said ‘Look, how weird is that?’ It was hovering there and he first looked at it with eyes closed….made him look again, got my other mates to look – there was five of us, three scooters – and all of sudden this blue white cloud moved in quite fast.

“The cloud came up to this metallic thing in the sky, the only cloud in the sky – it ended up over this flying metal thing, moved off and the metal thing had gone.

“So honestly I always think of that UFO whenever I get back to Blackpool.

“So I’ll be going down the Manchester Bar just for old times sake and probably on the Pleasure Beach as well.” 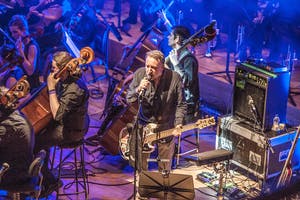 The last Haçienda Classical at Lytham Festival in 2017 was a sell-out and as the nation’s concert-goers begin to find their way back to live music, Hook is hoping this next gig will be just as successful – semi-retirement he says was alright for a while but didn’t quite suit him.

“We did our first gig the other Friday, the first in two years but what was surprising was how everyone did manage to switch back to ‘normal’ – it was like it was all a bad dream.

“At my age I am still a bit wary, no one wants to get ill or be the cause of someone getting ill, so the more careful we can be the better, but no it was lovely and it was great to get back.

“The odd thing about being a musician is that it’s not really a job, you can earn money with it but you can also lose a lot as we’ve done but it becomes a vocation – you have a need as performer to do it.

“I was sat sometimes thinking semi-retirement isn’t bad I began to see why people go for it but then I got back on stage and it was ‘oh s***’’ it’s an itch you can never really get rid of.”

Indeed, with the Haçienda Classical there have been a number of ‘wow moments’ in the last six years, playing the Royal Albert Hall, says Hook, was one of them.

The collaboration between The Haçienda, Manchester Camerata, DJ Graeme Park and musical director Tim Crooks has proved remarkably enduring and it is something Hook is very proud to be a part of and he says a tad surreal.

“I remember thinking club hits with an orchestra? That surely can’t work but honestly it’s magical, all these musicians, some would you believe who used to go to the Hacienda – it’s mental but a joy to be part of.”

Haçienda Classical will again include orchestral renditions of much-loved classic club records from The Haçienda’s heritage, bringing new additions and arrangements of seminal tracks to the set, adding to the repertoire.

Hook says: “The interesting thing about the Haçienda is it survived for 16 years; to say it was fraught with difficulties and problems would be the biggest understatement.

“We were musicians, we had an idea to bring people together who were like us, misfits, oddballs, people who were different and it was very, very good at that, it really was. Our business brains weren’t put in our heads, they were put in our posteriors so that was never a concern until it was too late.

“Acid house, when it hit in England, was centred on the Hacienda, that explosion of myth if you like, around all that lot, gave us the ability to be heard around the world – it’s a very very well known club from Manchester.

“It’s also been the basis and an inspiration for a lot of other clubs in England and around the world.

“The last five years were hell but during those exact same five years we had Madchester – the Happy Mondays, Stone Roses, Oasis, James, Inspiral Carpets – all these massive bands that exploded in that Madchester era so the Hacienda as far as legends go, it had gigging, acid house, Madchester. 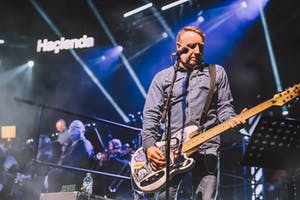 “Me and Rob Gretton lost nearly everything we owned because of the mistakes but then you think the ideal, the sanctuary for these wonderful people, wonderful ideals that were born – [Factory Records boss] Tony Wilson used to say we changed history, we made history not money.

“It does make me wonder what would have happened if we were canny businessmen but we weren’t but you can’t buy a legacy like that and it is because of that legacy staying with us, that’s what we’re able to celebrate now without the bad bits.

“We celebrate through Graeme Park, one of the greatest DJs through that time because of his work through the Hacienda and then through the orchestra bringing new life to what were actually one hit wonders.

“These songs became synonymous with the club because they were one-hit wonders, which is another really weird thing.

“You can get a lot of artists that have had massive songs at the Haçienda but then have never heard anything else by them and this is what we celebrate.

“Music is cyclic and the appeal and the excitement – the atmosphere is incredible.

“It’s a wonder to behold”

Tickets now on sale at https://www.blackpoolcricket.co.uk/tickets